Helen Chatterton was born in Bury, Lancashire in 1961. The seeds of a lifetime's obsession were sown when her Scottish mother taught her to knit and sew at the age of seven, and growing up in a textile-based town and household fostered a passion for all aspects of fabrics and yarns.
She studied Classics at Liverpool University and after returning to Liverpool, she completed her City and Guild Part II Creative Studies in Knitwear at Huddersfield Technical College.
At Huddersfield, Helen started experimenting with velvet, and as part of a project for her City and Guild started to make a range of samples for cushions, throws and wall-hangings.
In 2012 she launched a new collection called City on Cloth. City on Cloth is digitally printed fabrics, featuring old maps, which are then transformed into scarves and smaller items. She also collaborated with the British Museum using one of the maps of London from their collection and the result was a scarf backed with Harris Tweed. The City on Cloth collection is partly a result of her love of maps and a lifelong habit of acquiring books. She designed a collection for Tate Britain in 2013 for their Lowry Exhibition, and made two designs of tweed/silk scarf which sold in their gift shop. Helen has forged links with a tweed mill in the Scottish Borders, and has started to commission tweeds to her chosen colours. In January 2014 she launched a range of throws.
Colour is the inspiration for her work, often the juxtaposition of colours not usually put together. She get lots of inspiration when sourcing new fabrics. Some colourways, particularly in the velvet scarf range, reflect period themes from two of her favourite periods in history, literature and music - the 1920's and 1930's.
Everything is made from start to finish by Helen and her aim is that whoever buys one, has a one-off, hand crafted, well-made item, which will give pleasure for years to come. As well as being beautiful to look at they are immensely practical and hard wearing. 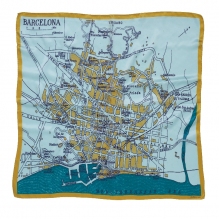