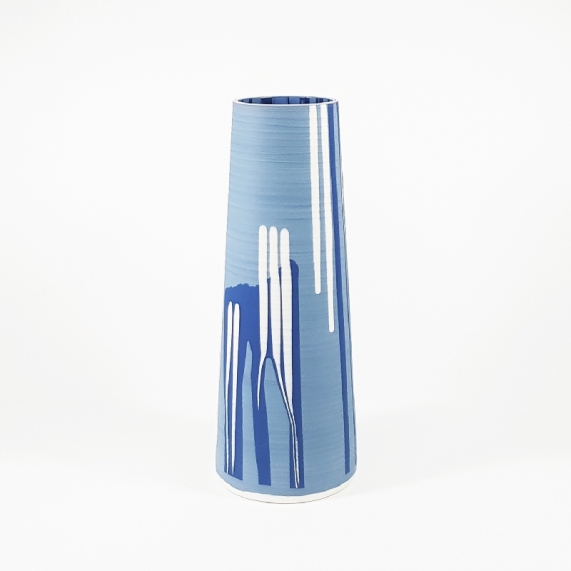 "My ceramic work is above all else, a celebration of the natural world informed by my daily observations, travels and life in my coastal hometown. I enjoy the duality of mixing precision with playfulness; many layers of clay slips are built upon in a highly controlled manner, whereas the bold markings etched into the surface and the brushed glazes are added with impulsivity and freedom. My focus is on exploring the language of abstraction to evoke the elemental power and ever-shifting dynamism of nature, communicating not through narrative and figurative forms, but through mood and momentum."

All pieces are individually hand made by Rowena in her Brighton studio. Rowena was selected to become a member of The Sussex Guild of Professional Designer Makers in 2016, was a finalist for the Craft & Design Selected Awards: Ceramics in 2013 and in 2011. She graduated in 2002 with a BA (Hons) Three Dimensional Crafts (specialising in Ceramics). In the same year she won "The Best Up & Coming Local Artist Award, Brighton & Hove" having set up in a ceramic art studio as a full time artist, designer and maker. Rowena continues to develop and produce striking contemporary ceramics for numerous galleries and exhibitions nationally and internationally.

Rowena's ceramics have featured in Sussex Life, Vogue, The World of Interiors, Elle Decoration Magazines and in The Guardian, The Times and The Metro Newspapers.