George Ormerod makes hand-thrown porcelain and stoneware in vibrant colours. He works from his studio in Newcastle on Tyne, which he set up in 1990, and exhibits in galleries nationwide.

George makes functional and decorative ceramics using coloured slips and glazes that achieve exciting effects. His work is inspired by the ceramics of the 1950s and 1960s and he is very much influenced by Janice Tchalenko. His patterns are created with a technique similar to batik using different resists. He layers thick glazes which bubble, mingle and often run when fired to produce a rich effect.

George's recent work is more minimal, with sleeker lines and shapes that are influenced by the Bauhaus and Japanese pottery, but still with luscious glazes. 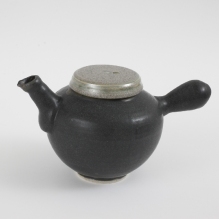