Our friendly and knowledgeable staff is happy to help. 01252 713208 | gallery@newashgate.org.uk

Please note that all orders will be posted after the lockdown has ended.

Jane Muir studied ceramics at Central St Martins School of Art and the Royal College of Art. Since leaving the RCA in 1992 she has exhibited widely, notably in Ceramic Contemporaries, V&A, and a solo show at the Molesey Gallery, Surrey. In 1997 she was also awarded a Crafts Council Grant helping her to set up her present studio.
Jane Muir specialises in idiosyncratic hand painted figures representing a witty and uncluttered observation of the world. Figures that stand alone or placed in an architectural landscape are hand modelled, allowing her the freedom to sketch with clay and develop ideas during the making process. Jane's figures are not about specific individuals but are a personification of the stereotype or archetypal character. 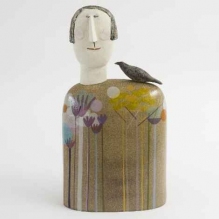