Our friendly and knowledgeable staff is happy to help. 01252 713208 | gallery@newashgate.org.uk

Sonia Rollo was educated at the University of Glasgow, graduating with a degree in Agricultural Botany. Her interest in animals started in childhood with a pig called Hilary, geese called Charlie and Cassandra, and a mongrel, Pearl. Training as a biologist meant, observing plants and animals, drawing them to aid understanding. 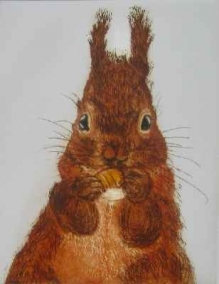