Eliza practiced as an architect for ten years before deciding to take up a career as an artist and illustrator full-time in 2010. She has consistently drawn and painted throughout her life, her first illustration commission being a Spanish children's book, when I was aged just 13.

Having grown up in Spain, Eliza spent a year in Italy and then moved to Scotland where she graduated from Glasgow School of Art with a degree in Architecture. She later finished her postgraduate architectural studies in London.

Eliza's speciality is silk screen printing, but she also works in mixed media, watercolour and acrylic. As a keen cycling fan, she is known particularly for her cycling themed artwork, but also produces work on a wide range of subjects such as cityscapes, dogs, sports and people. 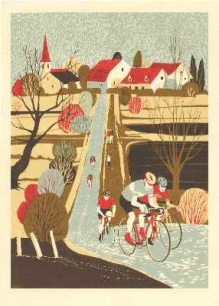