Collection is available by appointment. Postal orders will be shipped weekly. If you wish to view a specific artwork in our online shop, let us know and we will facilitate this. Our friendly and knowledgeable staff is happy to help. 01252 713208 | gallery@newashgate.org.uk

The paintings here are the result of him undertaking the short ferry journey from Sconser to The island of Raasay.

Matt Draper has described the body of work following his journey as follows: "Whilst on the boat trip in late October 2019 I witnessed a fast moving cloud structure from which numerous shafts of light descended the light both illuminated and obscured the mountains and the water. This light almost traveled along side the boat as we crossed the Sound it followed us. At points there were numerous streaks of light and at others just a chink or an illuminated cloud or two, I hastily an hurriedly attempted to record this fast moving, dramatic and ever evolving light condition in my sketch book, on my return to the studio I immediately started to make a number of images in reaction to that experience. After witnessing that atmospheric event during that twenty or so minute crossing I made the series which comprises some thirty four pieces. I became absorbed in that series, in particular I became fascinated in the subtle changes within the cloud structure and in turn the subtle effects this had on the land and water."

Matthew Draper is an Edinburgh based artist who trained at Walsall College of Art and Falmouth College of Arts in the early 1990s. Known for making atmospheric and emotive imagery, the subject matter of which is the artist's native British Isles. Matthew has, over the last twenty six years, exhibited widely throughout the UK establishing himself as one of the pre-eminent makers using the medium of chalk Pastel. The artist has produced over twenty one man shows working with some of Britain's most established dealers and has received numerous awards and accolades. Examples of the Artist's work can be found in private, corporate and public collections both in the UK and abroad, these include the collection of The Bank of Scotland, The Huawei Corporation, Falmouth Art Gallery, Kelvin Grove Gallery and The City of Edinburgh. The Artist is a Professional Member of the Pastel Society, UK Visual Arts Scotland and the Society of Scottish Artists. 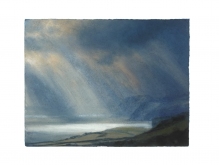