History of the Gallery 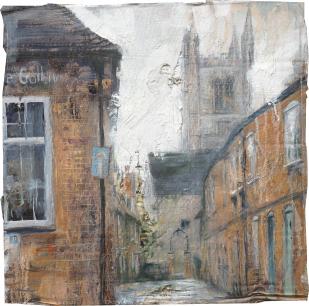 On January 23rd, 1961, the Evening Standard reported on a remarkable exhibition in ‘a modest little gallery at Farnham, Surrey.’ The catalogue named, amongst others, Picasso, Pissarro, Graham Sutherland, Jacob Epstein, and Henry Moore; and the reporter noted with some amusement that ‘This influx of art produced over the last 100 years has made the town quiver slightly.’[1]

The ‘modest little gallery’ was the Ashgate, opened at 19 South Street in 1960 by Elizabeth and Merton Naydler, with the support of Leszek Muszynski, a teacher at Farnham School of Art. The first provincial gallery to show work of international status while at the same time nurturing local talent, the Ashgate went on to stage a series of solo shows by leading contemporary artists, including John and Jean Bratby, Sandra Blow, Willi Soukop, Peter Blake, Elizabeth Frink and Mary Fedden. Between these high-profile events, promising new artists were invited to display their work.

In July 1962 the Ashgate Gallery hosted a pioneering exhibition, British Sculpture Today, which brought together the work of over 20 leading sculptors in the gallery space and the Bush Hotel gardens. Open air exhibitions of sculpture were a novelty at the time, and photographs of the event capture some of the excitement generated by ‘the most ambitious undertaking of its kind to have been put on by a provincial gallery’.[2]

Wandering through the exhibits, the Farnham Herald’s reporter felt that Elizabeth Frink’s Winged Figure got ‘lost in the leaves’, but found Henry Moore and Barbara Hepworth’s work ‘as compelling outdoors as in.’  “What is that? A baboon?”, he heard a woman ask, as he strolled past Anthony Caro’s ‘ruggedly massive’ Woman with Flowers.[3]

From the outset, profits from sales at the gallery were used for the benefit of artists and the wider community. Scholarships and prizes were created to nurture local talent; art was purchased for local and national museums; and a picture and sculpture hire service allowed anyone interested to enjoy an original artwork in their own home. “In this way”, explained Leszek Muszynski, “people will be able to enter into the world of art.”[4]

This enlightened approach continued after the gallery moved to new, larger premises in Wagon Yard. With more space, and a central location, awareness of the Ashgate Gallery’s work increased. ‘The gallery should become at least as well known in Farnham as it has for some time been known nationally’,[5] one commentator dryly observed.

In its new premises, the gallery weathered many storms. The site was prone to flooding from the River Wey, and the buildings suffered as a result; funds were raised to restore the damage, but in the coming years, the gallery proved hard to sustain financially, and by 1975 was threatened with closure.

Into the breach stepped Elfriede and Alan Windsor. The Ashgate became the ‘New Ashgate’, and the New Ashgate Trust Limited a charitable trust, with a commitment to promote contemporary visual arts and crafts to as wide a public as possible, through exhibitions, educational events and projects with artists. This work continues today, making the gallery a vibrant, welcoming place for exhibitors and visitors alike.

Under Elfriede’s directorship, the gallery developed a distinctive style, reflecting her conviction that both fine and applied arts were of equal value. Mixed exhibitions of complementary ceramics and sculptures, jewellery, paintings or textiles allowed new, exciting connections to be made. At an exhibition held in November 1980, featuring watercolours by Harold Cheesman, Lynne Curran’s tapestries, and the ceramics of  Henry Hammond and David Leach, the ‘red spot’ stickers used to indicate a sale ‘appeared like instant measles’.[6]

The gallery gained a reputation for quality, ‘sometimes challenging’, work which ‘provides stimulation to the hundreds of people who visit’.[7] Special shows on a wide variety of themes: ‘Black and White’, ‘Regarding Women’, ‘Made to Use’ and ‘The Garden’, to name just a few, provided opportunities to bring together the work of a wide variety of exhibitors, and there were retrospectives linked to Scholar Press publications on Dame Laura Knight, Gertrude Hermes and the Euston Road School. The Trust’s own ventures into publishing began with ‘John Verney’s Farnham’, a delightful, annotated collection of pen-and-watercolour studies of the town.

The New Ashgate Gallery originally occupied roughly half of its current space, the rest being Collett’s Bookshop. When the opportunity arose for expansion, The Farnham Building Preservation Trust obtained a 25-year lease from Waverley at a low rent, with responsibility to maintain the building, carry out restoration, and extend the gallery into the former bookshop. The greatly- enhanced gallery space was then let to the New Ashgate Gallery Trust. New upstairs workshops housed the Ashgate Book Studio, and with the involvement of the Surrey Guild of Craftsmen and others, the craft offering of the gallery was developed. Further enhancements to the building in 2004 created the light, open space enjoyed by visitors today.

A complete list of the artists and craftspeople who have at one time or another exhibited at the gallery would make extraordinary reading. The commitment to artists of both fame and promise made by successive directors and trustees makes the scope of its impact truly impressive. But perhaps even more extraordinary and touching is the extent to which its supporters have consistently, in ways great and small, stepped forward in times of trouble to ensure its survival. It is, above all, a place that inspires great affection; long may it continue to do so.

Learn about the current work of the Gallery.

[2] Foreword to the Exhibition Catalogue, written by Philip James, Chairman of the Arts Council