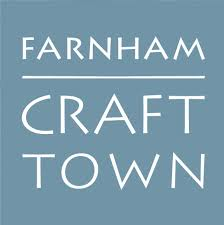 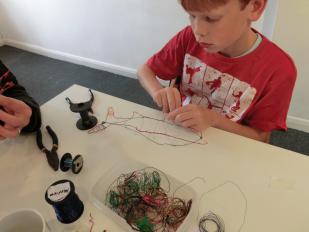 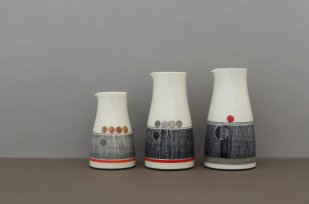 Craft is embedded into the fabric, the homes as well as the cultural life of Farnham. Farnham and New Ashgate Gallery celebrate the rich craft history and a variety of craft organisations practising in Farnahm today. Together with Crafts Study Centre, Farnham Maltings, the University for the Creative Arts, the Farnham Town Council, the Farnham Pottery and a group of local makers, New Ashgate Gallery is delighted to be part of the fabric of the England's Town of Craft.

In 2020, Farnham was awarded World Craft City status. Farnham is the first town in England and only the third region in Europe to be given ‘World Craft City’ status. Other European holders of the designation include the Outer Hebrides for Harris tweed and the Danish island of Bornholm, famous for its glass production and pottery using locally worked clay.

The World Crafts Council welcomes Farnham to the network of world craft cities which is a contribution to the UNESCO Creative Cities programme. Only 36 other regions and cities across the globe have been awarded Craft City status.

Just an hour's drive from London, Farnham is a beautiful country town with some of the finest Georgian architecture in the south and a parish church and castle dating back to the 12th century. Crafts have been practised in the area already during the Roman period: the district was known as a pottery centre due to its supply of gault clay, oak woodland for fuel and good communication links. Kilns dating as far as AD 100 have been found in the area. Today, Farnham has a wealth of tempting opportunities for shopping in independent stores, eating out, sightseeing or enjoying gardens and flower-filled yards.

The Crafts Study Centre is a specialist university museum open to the public as well as a research centre and home to internationally renowned collections of modern British craft. Its acclaimed collections include modern and contemporary calligraphy, ceramics, textiles, furniture and wood as well as diaries, working notes and photographs of makers of the 20th and 21st centuries. The Centre hosts inspiring exhibitions by leading artist-makers, lectures, symposiums and open days.

Farnham Maltings is a cultural organisation which believes that by being creative, connecting with others and articulating new ideas we will become happier, healthier and more inclusive. Set in the heart of Farnham this collection of buildings host a wide range of crafts makers including printers, picture-framers, jewellers and textiles artists.

The Farnham Pottery is a carefully preserved example of a Victorian country pottery with a host of charming architectural features. The potters of the day delighted in demonstrating their skills in making ornate chimney pots, window frames and archways. The site retains its industrial heritage whilst making a perfect home for today's makers and artists. 318 Ceramics and West Street Potters operate at the Farnham Pottery.

Farnham is an ideal centre for exploring the surrounding countryside with it gentle hills, rivers, leafy lanes, historic buildings and picturesque villages. Farnham is also well situated as a centre from which to visit many places; Windsor, Winchester, Portsmouth to mention just three with historic connections. Farnham is part of the Surrey Hills which offers some of the South East's most beautiful and accessible countryside. Famous beauty spots include Box Hill, Leith Hill and Devil’s Punch Bowl. This special corner of England has lots to offer you from breathtaking countryside to imposing stately homes such as Clandon Park, picturesque gardens and contemporary art galleries.

Surrey Hills is committed to developing a sustainable, inclusive and adventurous programme of arts and crafts in the AONB. The area has inspired and been home to some of the UK`s most influential and acclaimed artists, novelists, musicians and performers. The Surrey Hills also has a rich heritage which can be discovered through the abundance of castles, settlements, stately homes and museums.

Watts Gallery is nestled in the Surrey Hills at Compton, the Watts Gallery is dedicated to the Victorian era painter and sculptor George Frederic Watts. With over one hundred paintingsand sculptures on permanentdisplay, visitors can experiencethe Watts Collection in the historicgallery with its original decorative schemes.