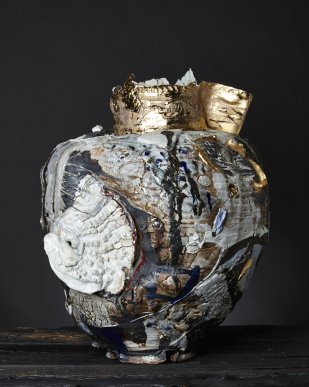 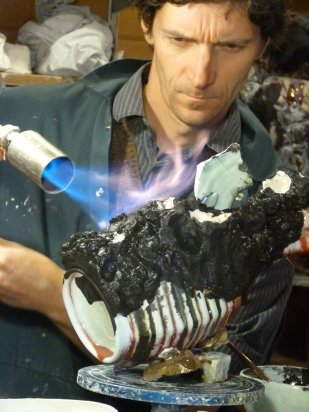 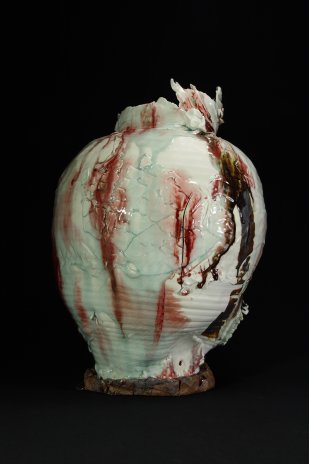 New Ashgate Gallery, 60 Years of Supporting Talent: Celebrating the Past, Inspiring the Future

Originally from Wales, Gareth lives and works in Hampshire. He has exhibited his ceramics across the UK and internationally, and features in collections worldwide. A Fellow of the Craft Potters Association and Brother of the Art Workers Guild, London, Gareth now sends most of his work to America, where he is represented by the Jason Jaques Gallery in New York.

What is it that draws you to clay?

Clay is the ultimate abstract material – ubiquitous, adaptable and yet historically charged.  Arguably humanity’s oldest medium, yet still a strange fledgling.  It comes with baggage, which is fun, and can be whatever you want it to be, which is also fun.  The fact that it is a wanton recipient of bodily energy appeals to the sensualist in me, and I exploit that quality to the full. It is a material of great emotive and allusive power.  It is surface and form, paint and matter, mud and fire; it is the stuff of art and the stuff of life.

How do you begin a piece of work? What are the major influences that inspire your work? How much do you control the outcome of each piece? Do you work to a pre-formed idea of how a finished piece should look, or does the process take over?

I have been looking and making for many years now. I have (inevitably) a substantial mental back-store, constantly augmented, of surfaces and shapes and artists and states and qualities...which I am inclined to draw upon intuitively nowadays, rather than engaging in any premeditated planning. This is a leap of faith, of sorts, but trusting that there is enough innate knowledge in my store of habits and actions to see me through usually pays off. The process takes on a momentum of its own, once begun. The challenge, as ever, is making a start.  And then, of course, where to end.  It is a bit of a roller coaster. I am still bound up in the powerfully allusive and evocative resonances of ceramic history, particularly of certain vessel archetypes; their strangely human content retains distinct potency, especially in this industrial age that has so homogenised the appetites and expectations of the average urban being. I am fuelled by (and drawn gravitationally toward) artistic practice of whatever discipline that involves risk and disclosure on the part of the artist, and prompts the viewer’s active agency. Aesthetic jeopardy is a strange thing to rely on, demanding a certain courage (albeit of a minor form on the scale of human bravery) but somehow it is a window on the inner passions and a conduit to more vivid, penetrative results.  I proceed by means of intervention and reflection, really.  The interventions can be pretty dramatic or very quiet.  I allow materials their voice, and in letting them whisper or scream a little more freely, I augment my own.  I am greedy.  I am interested in the gamut of material quality, and the whole spectrum of human experience.  Material and emotion are analogous.  This fascinates me.  Outcomes are inevitably pretty open ended nowadays.  My whole understanding of ‘completion’ is in flux, which seems appropriate, because ‘flux’, fiery or otherwise, is a major force in what I do.

How did you first get involved with the New Ashgate Gallery, and how did you come be on the board of trustees? Can you talk a little about being an exhibitor and a trustee at the gallery?

I approached the gallery in the mid ‘90s. After graduating, having completed four years as a technician and then a three year stint as production potter at the Farnham Pottery making terracotta gardenware, I became potter in residence at South Hill Park in Bracknell, Berkshire.  It was here that I began to hone my work into an offering suitable for exhibition and the Ashgate, as my ‘local’ gallery, was a natural place to start. Trusteeship was suggested to me by the outgoing trustee Peter Parkinson, who works with metal. Representation from someone with craftsmanship perspective was desirable on the board, given the Gallery’s long and strong reputation for presenting quality three dimensional work, and I was a trustee in that capacity for about three years.

I have contributed to several group exhibitions over the years and find the interior space and atmosphere of the gallery intimate and inviting, which is useful, from a customer perspective, in that the space has a ‘domestic’ feel and scale, allowing visitors to more easily bridge what is often a yawning gulf between the potentially intimidating ‘white cube’ and their own interiors.

The interview is based on personal communication between Gareth and Emily Cranny.​

For 60 years, New Ashgate Gallery has supported artists and makers. It promotes and champions the best contemporary art and craft and provides an unparalleled resource in Farnham, Surrey and beyond. The Gallery curates an exciting programme of exhibitions in the market place and events for artists and the community.